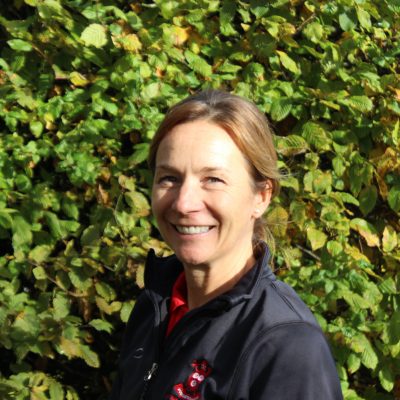 Helena joined St Edmund’s in 2004, after 9 years at Highworth Grammar School, Ashford, as Head of Year 13 and Deputy Head of the PE department.

Initially covering a Girls’ Games maternity post at St Edmund’s Junior School, Helena became the teacher for PE in the Pre Prep School, alongside Performing Arts and French. More recently Helena has returned to Senior School PE, taking on the role of Head of Senior School Sports She thoroughly enjoys the challenge of teaching pupils of all abilities over the whole school age range.

Helena studied a BSc in Physical Education, Sports Science and Recreation Management at Loughborough University of Technology, followed by a Secondary PGCE in PE and English.  Whilst at Loughborough, she participated in a wide range of sporting and dance activities. She was a member of the Sprint Squad, competing in various BUSA athletics meets, reaching the 100m UAU final in her third year.
Helena played club netball for Sandhawks Cranbrook in the Maidstone Premier League and hockey for Ashford Hockey Club.

Now, as a member of Invicta East Kent Athletics Club, she has completed the New York, Florence, Amsterdam and London marathons over the last three years with a ‘good for age’ standard.

As a keen all round sportswoman, Helena places great importance on fostering enjoyment of all sport to all ages and abilities. She intends to build on the co-curricular provision, incorporating the current drive to improve mental and physical wellbeing. These clubs will run alongside the already strong opportunities for elite team sports and sports scholars at St Edmund’s.  A particular focus will be developing the new relationship with Chelsea Football Club’s Development Team, alongside improvement of the already superb facilities at the school.