During recent weeks, a chink was found in the wall of Covid-related restrictions that have curtailed St Edmund’s life – all our lives – over the past months.  Those who took a peep through it spied tantalizing glimpses of a world in which pandemics didn’t feature and our pupils could enjoy what it is we offer – a glimpse of what we used to consider normal.

Normal, that is, by the standards of the Drama department.  For a few intense weeks industrious preparation for the Upper Sixth A-level Drama practical had been taking place.  The performance was to be performed outside before a small gathering, compensation of sorts (we couldn’t help but think) for the performances St Edmund’s pupils, parents, friends and staff had been denied throughout the year.

The evening began on the terrace in bright sunlight before George Burton, the night’s designated minstrel, arrived to strum parents and staff around the outer wall of the school, past the tennis courts and into a hidden, little known part of the St Edmund’s grounds.  There, around the shimmering surface of a lake from which tentacles reached, torches flamed, fires flickered and fairies whooped and danced in a dappled glade.  It was a magical sight and the perfect setting for Shakespeare’s A Midsummer Night’s Dream.

The performance opened with a flourish, a jazz number throughout which a host of Junior School dancers flapped and jived with contagious excitement, some of whom – Poppy Hendy (F7), Jodi Hughes (F8), Juliette Matharu (F6) and Violet Vant (F7) – would appear again in Titania’s entourage.  Such delight was not to last.  Quarrelling fairy royalty – Oberon and Titania – opened the dialogue and the fun-loving fairies were told in no uncertain terms to ‘skip hence’.   The exchange between Oberon (a commanding Matthew Bawtree) and Titania (a proud and equally commanding Amy Lawrie) shifted the tone dramatically and revealed immediately the skill of the actors in their syntactical dexterity and deft delivery of Shakespeare’s early modern English. It wasn’t only the fluency and control of the lines that was impressive: their cargo of clauses and diction was carried by an emotional intensity that made the dialogue the burnished mirror of thought and feeling.

Relief from Oberon’s promised torment of his queen came with the bumbling arrival of the Mechanicals, led by the beleaguered Peter Quince (Lucy Henderson in managerial mode), whose many tasks included trying to supervise – or perhaps just cope with – the irrepressible dramatic aspirations and hyperbolic loftiness of Bottom (the hilarious Elizabeth Bourne).  In addition to his own part of Pyramus, Bottom proved keen to steal those of Flute (a galumphing Maddie Marsh), allocated Thisbe in the play-within-the-play, through an impromptu audition in ‘a monstrous little voice’, and Snug (a deadpan Chloe Spry), playing Lion.  Jess Phillips, playing Snout playing Wall, and Olivia Ness, playing Starveling playing Moonshine, would have their sublimely comic moments at the end, the former acting a chatty and obstructive wall keeping apart the lovers and the latter an exasperated explainer of dramatic detail.

The dynamism brought to the glade by the Mechanicals, motored by the zealous and strutting Bottom – his fretting would come later when he woke alone and ass-headed – was sustained by the entrance of Demetrius and Helena.  The ingenuity of the costumes, designed by Tam Walker-Reid, was on display here.  The magical transformations of Matthew and Amy into the imposing fairies, their metamorphoses completed by make-up designed by Ellie Walker-Reid, was also at work, and very helpfully, in the costume designs of Helena and Demetrius and Hermia and Lysander. Matching bathing costumes provided a handy visual clue as to who was destined to be with whom and allowed the audience to keep pace with the accelerated tempo and the young Athenians’ tangled love lines.  Helena might have been besotted with Demetrius but Demetrius was besotted with Hermia, who herself was besotted with Lysander who, once the mischievous and slightly yobbish Puck (a rarely still James Press) had mistaken Lysander for Demetrius, became besotted with Helena.  As did Demetrius, whose feelings had also been changed by the amorous powers of the magical flower Puck had girdled the earth to find.  The ensuing emotional tumult provided opportunities for the actors to demonstrate their range and versatility.  The superb Beatrice Paisley-Day (Helena), suspecting foul play from Lysander (Carl Le Hegarat) and Demetrius (Rob Gain), moved from infatuation to fury, while the spurned Hermia (Ruby Coupe), struggled to fathom Lysander’s sudden spite.

It was all performed brilliantly, not least because the emotional leaps and bounds, which complemented the very literal leaps and bounds of the cast as they zipped around the glade and leapt across water onto islands (and scaled trees in the case of Matthew and James), never menaced the cohesion of Mark Sell’s directorial vision.  Hermia’s crumbling before Lysander’s betrayal – raised brilliantly from the page by Ruby – seemed only to stress the comedy by adding a passion that stretched the genre tauter, and it was pretty taut already, having been adroitly streamlined by Assistant Director Howard Sykes.  Carl skipped rapidly from shooing off Ruby to popping his biceps in Bea’s direction before tussling with Rob, who moved easily from vehemently shunning Helena to pursuing her, in order to knock his rival out of the running by simply knocking him out.

The success – and it was a wonderful, joyous success – was as much to do with the pace the actors brought to the script as with their dazzling performances.  The action moved smoothly from Titania and Oberon’s tiff to their eventual reconciliation and from the emotional eddies of the lovers to their arrival in calmer waters, even if they didn’t know what magic whisked them there.  There was a good deal of knockabout fun too.  The physicality of Puck and Oberon, Bottom’s braying transformation, Helena’s kick to Lysander’s shin and Hermia’s knee to Demetrius’ … well, you can guess if you weren’t there to squirm … brought to the verse a visual counterpoint that made for a perfect whole.  The comedic conclusion knotted the threads together beautifully.  The lovers found their beloveds, Oberon’s pity released Titania from his spell and the hapless Mechanicals, happily reunited with Bottom, finally performed for all, chasing tragedy from their drama with their ham-acting, rebuking of the spectating lovers and downright refusal to die on stage quietly.  Or credibly.  Or with any dignity.

The evening, coming as it did after months of restrictions and distancing, was charged with significance.  It was a time to meet with others, enjoy the grounds gilded in sunlight and celebrate the talents of our students, unbound and onstage at last and an absolute joy to behold, unobstructed by any wall. 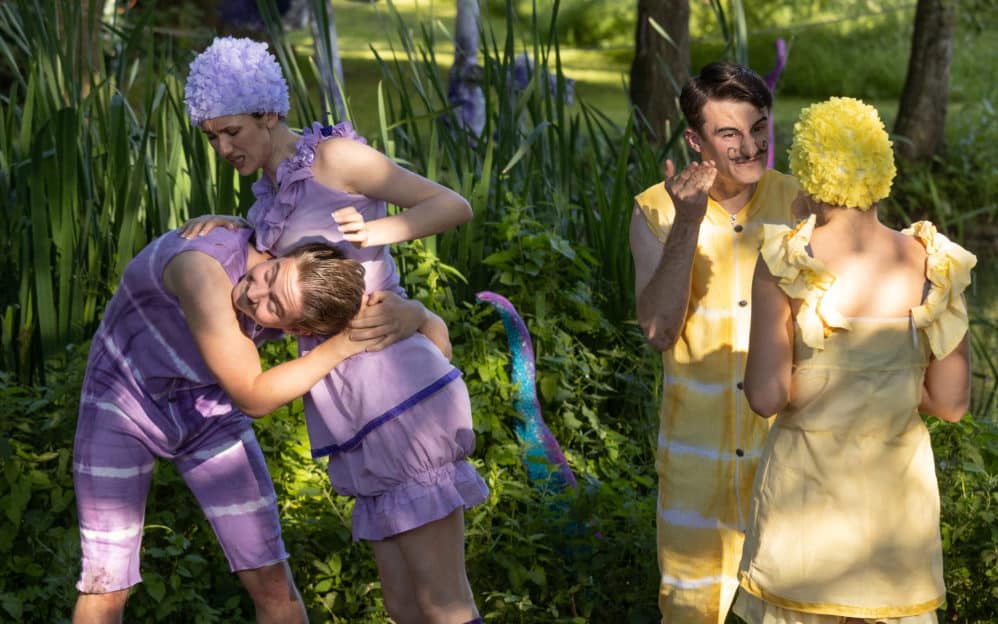 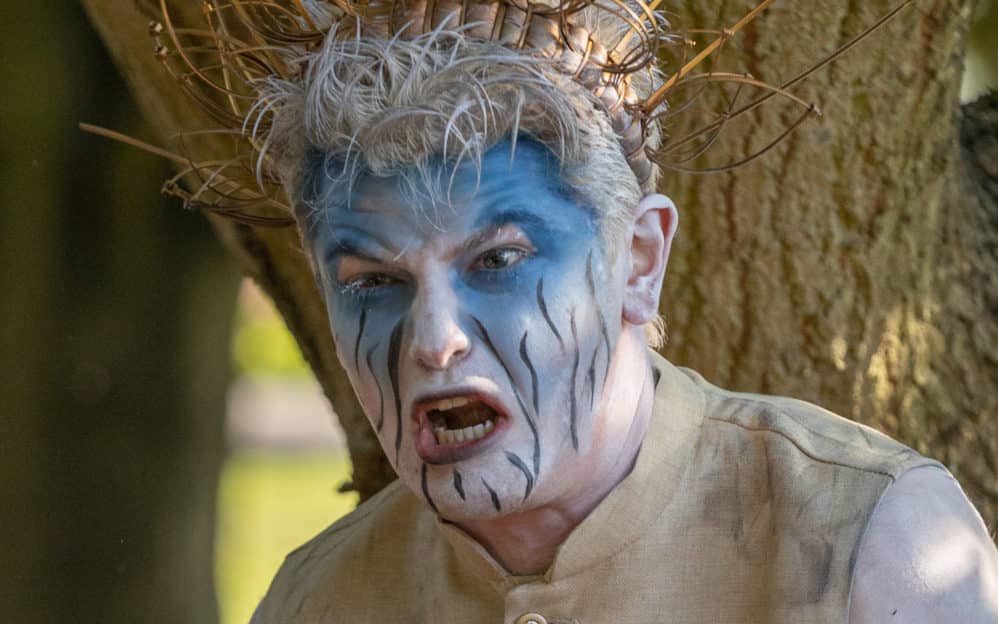 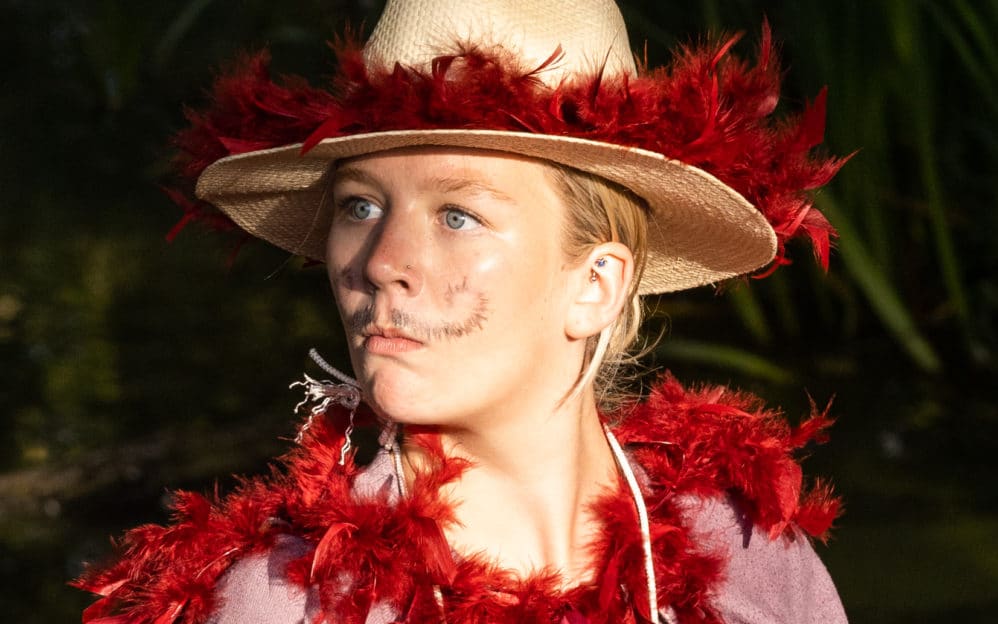 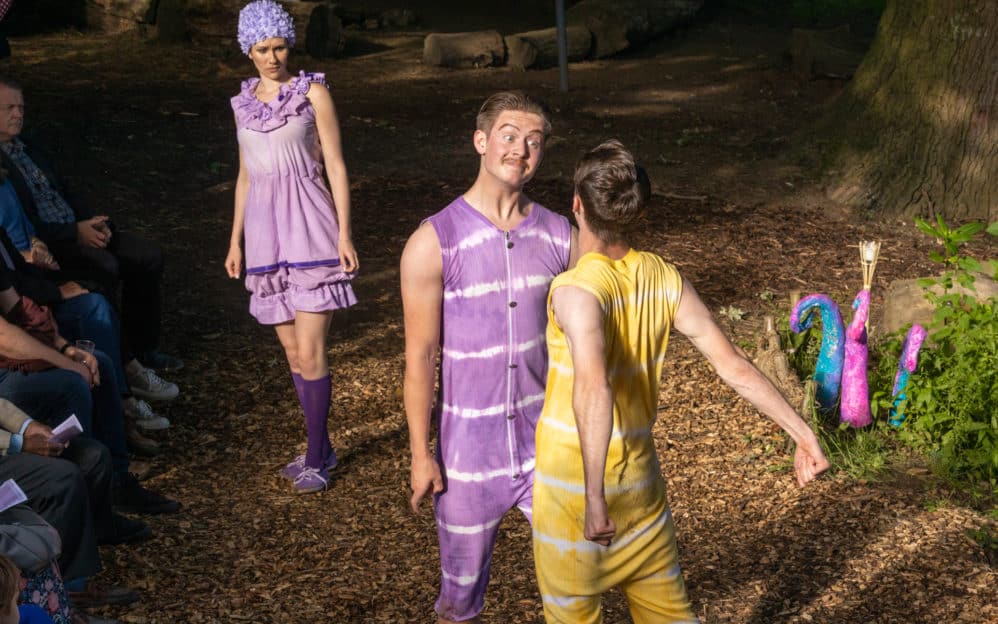 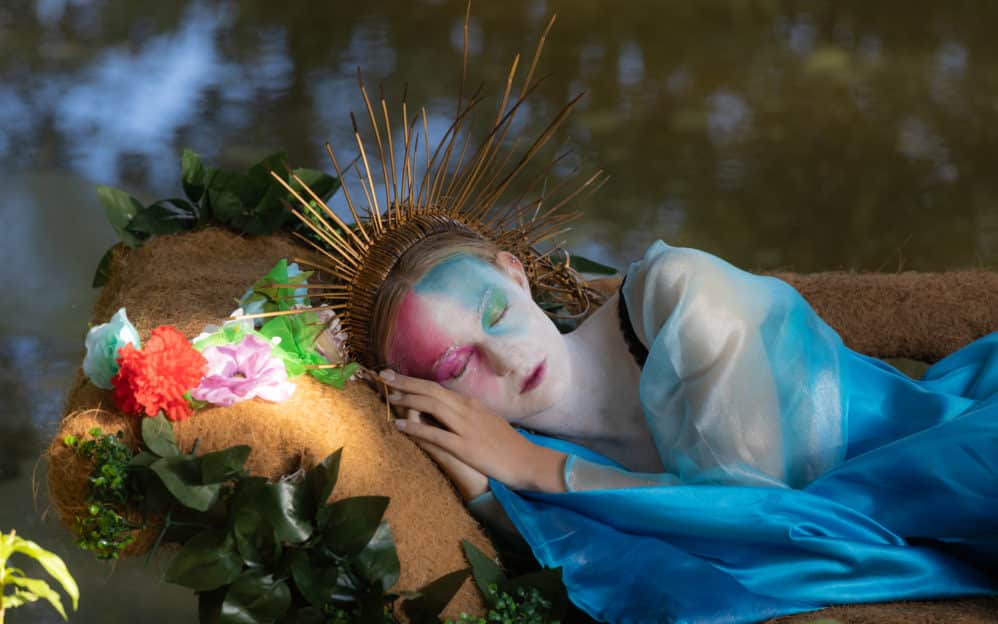 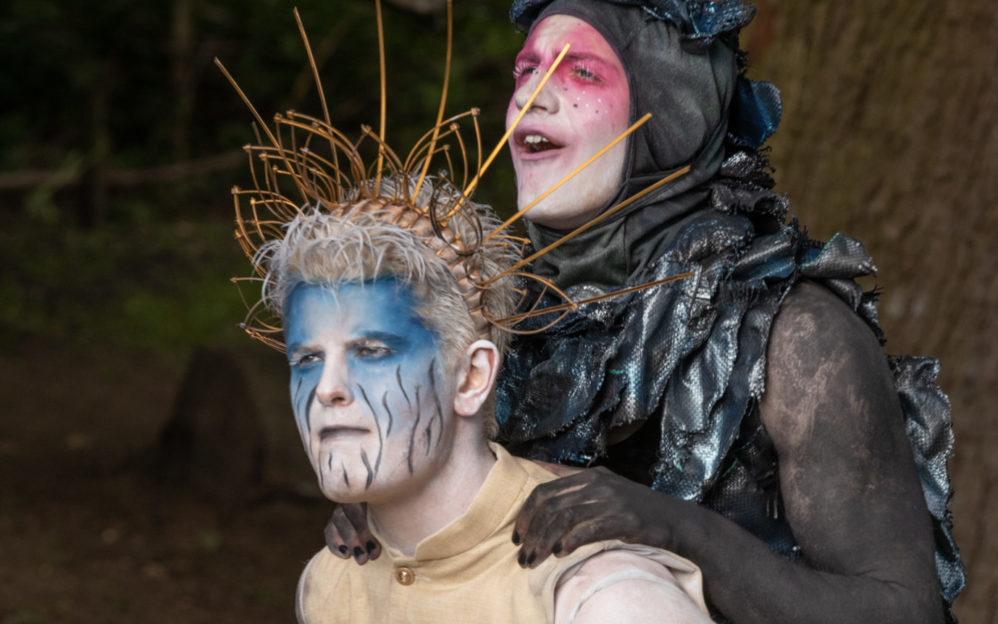 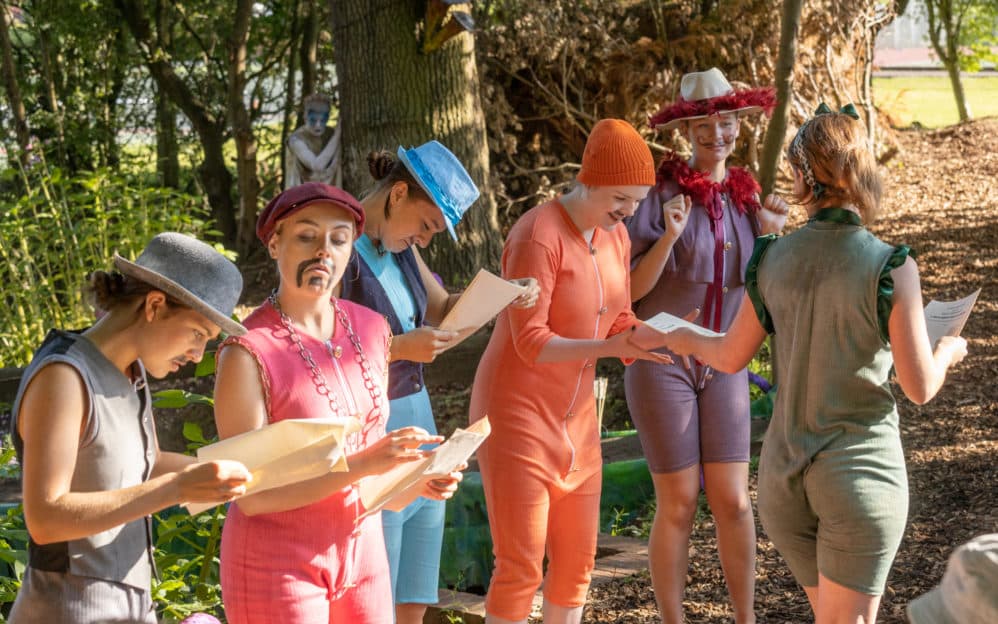 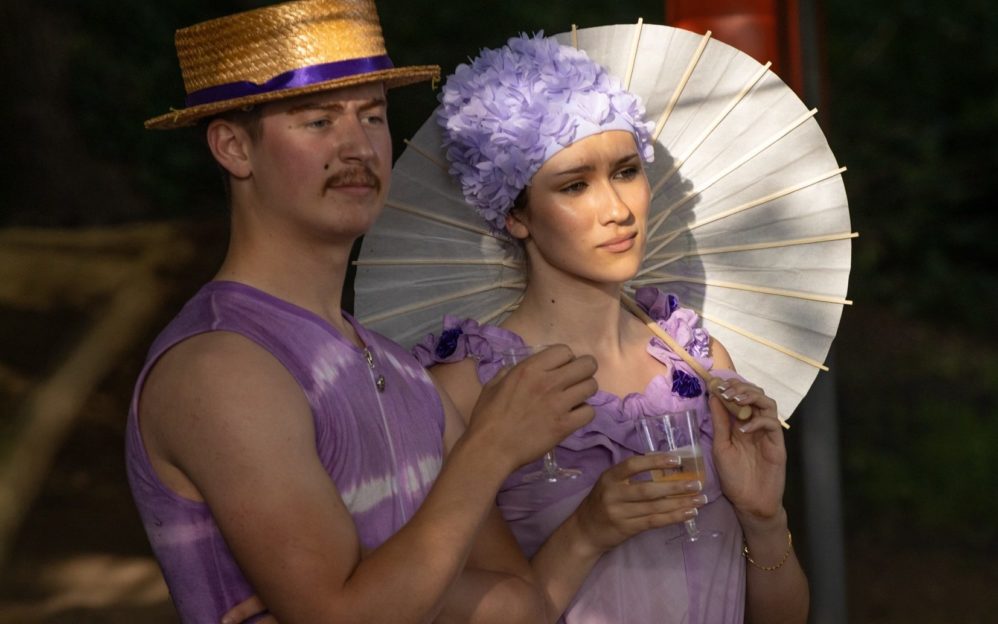 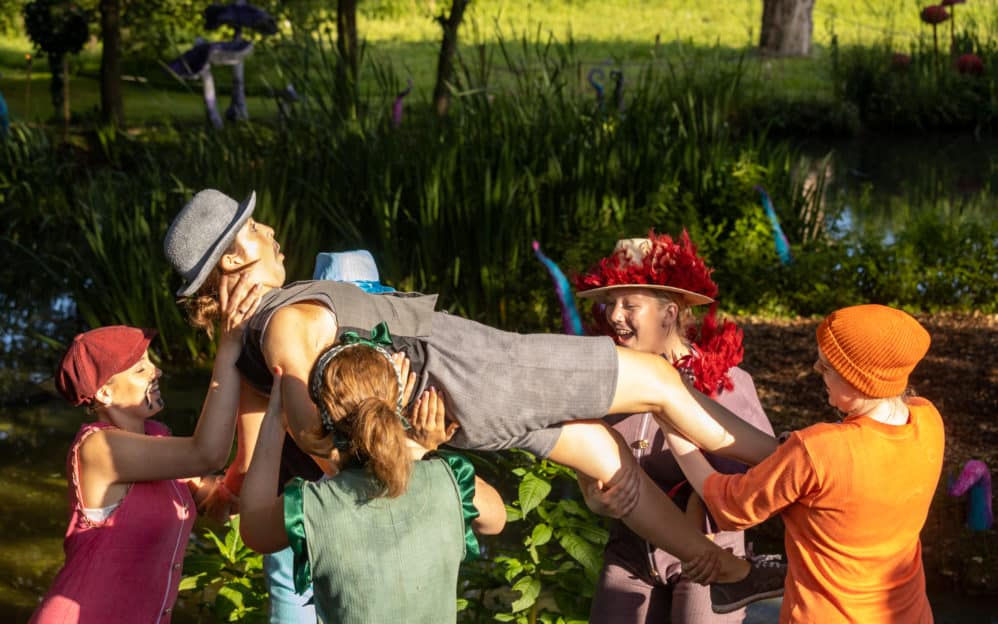 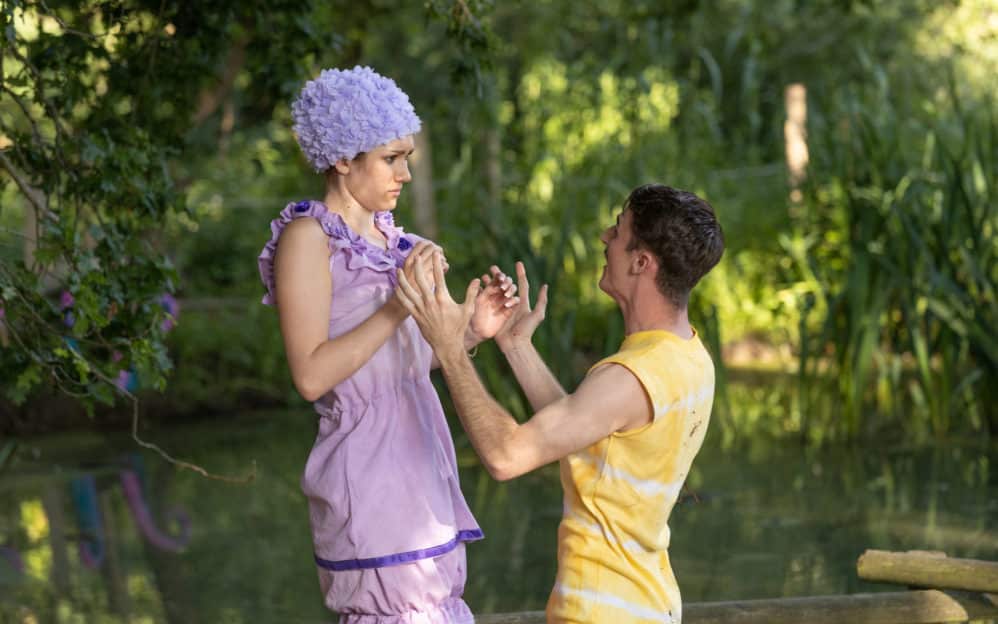 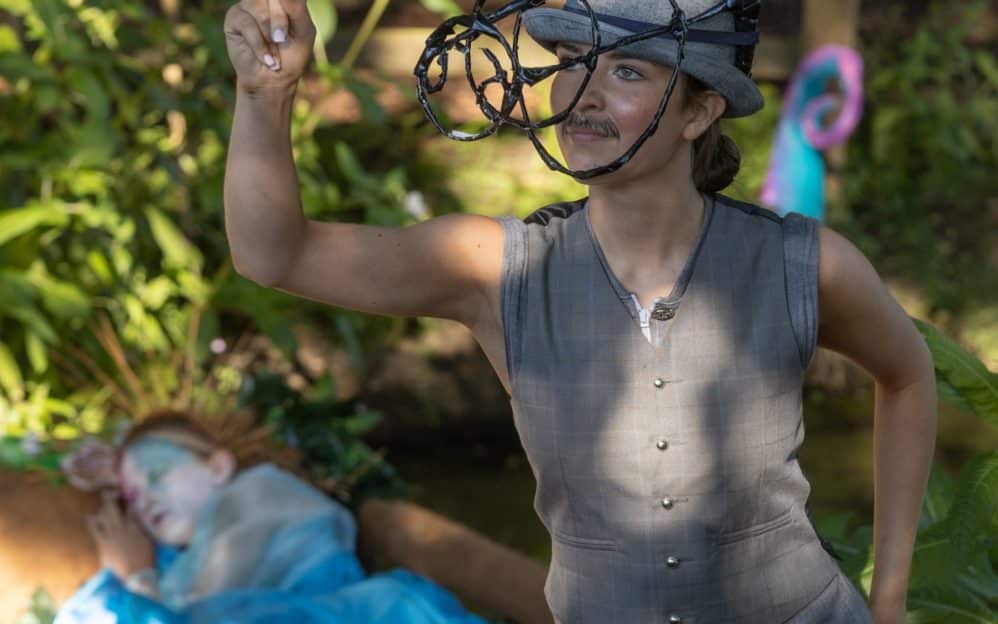 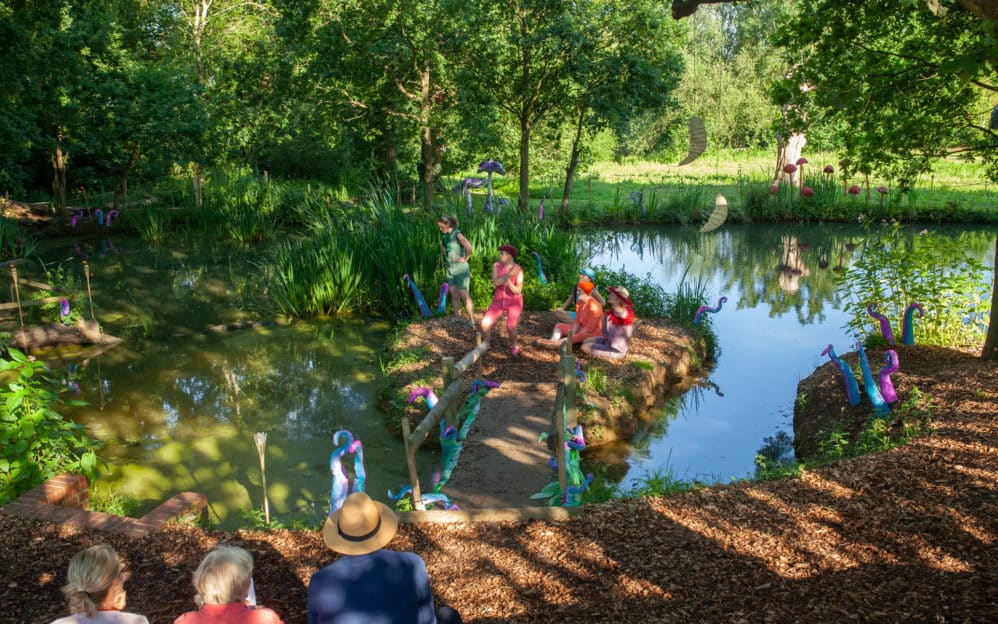 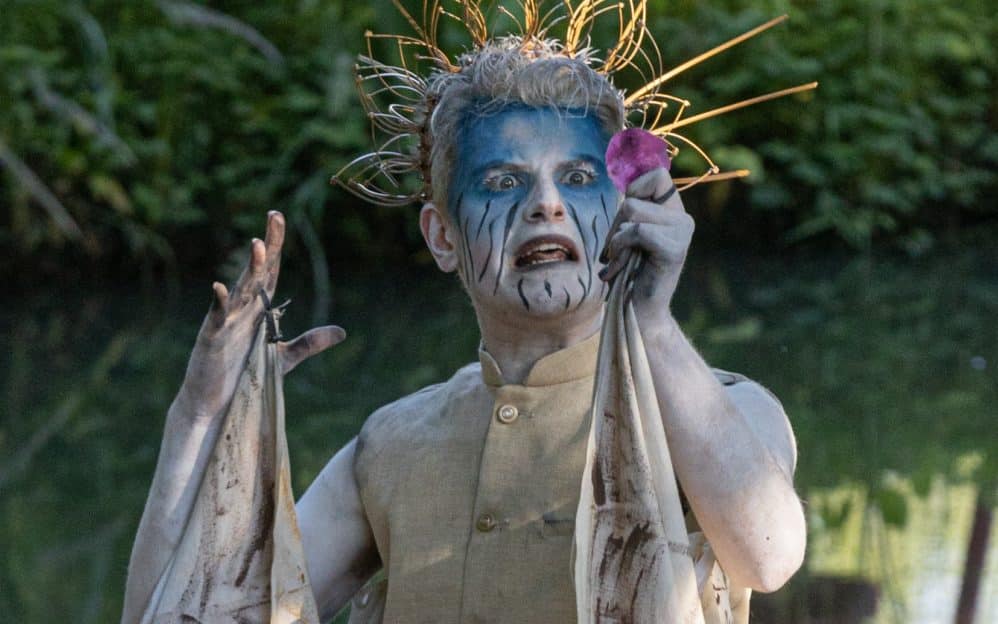 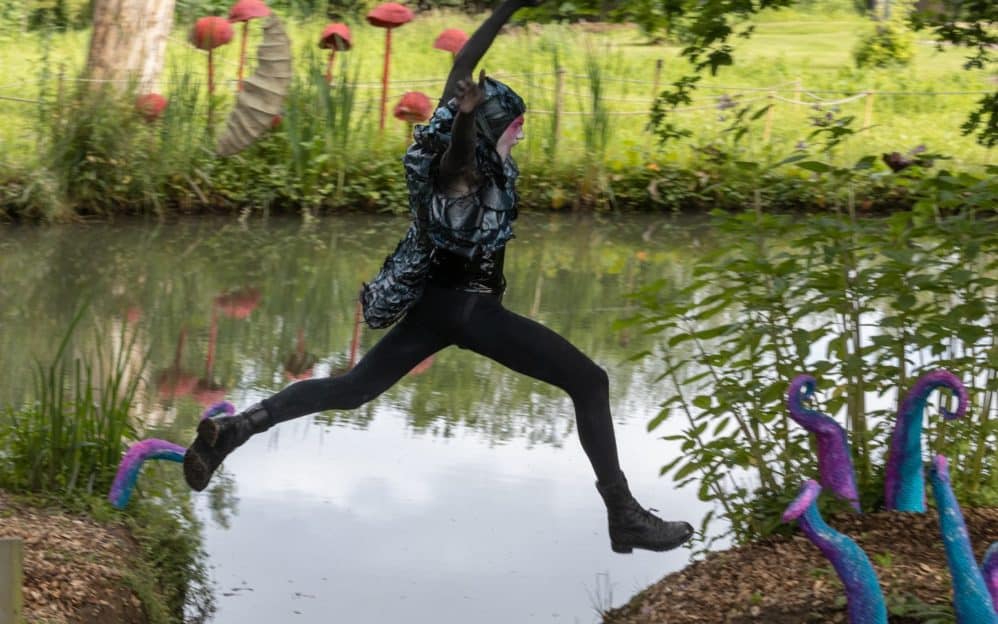