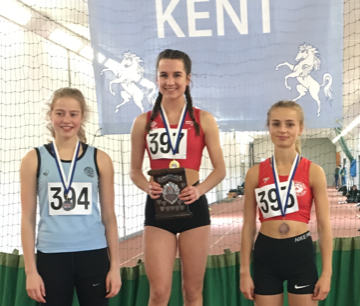 Joe Gordon (L6) has followed his astonishing innings of 224 against The Canterbury Academy last week with selection for the Kent Men’s 2nd XI. He played for Kent against Warwickshire this week and scored an amazing 57 on his debut against seasoned professional opponents.

Last weekend Alex Millard (L6, see photo) won the 800m and 1500m double in the Kent County Athletics stadium at the Julie Rose Stadium in Ashford. This was a tremendous performance and Alex now looks forward to the English Schools Championships in July.

At the same event, Jildou Chappell (M5) won the silver medal in the Javelin with an exceptional throw of 28.77m.

Huge congratulations to all three pupils on these impressive achievements.